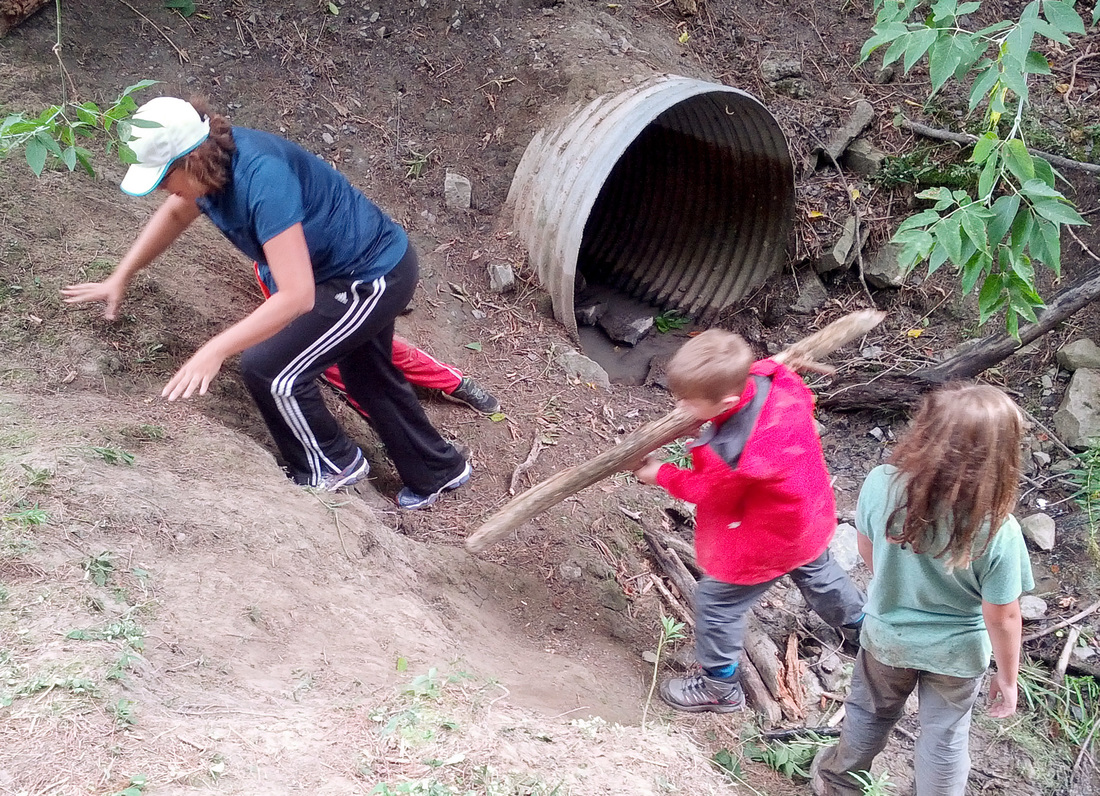 While every day brings new discoveries, excitement, and challenges that help us grow, sometimes we have days that feel truly magical from start to finish. Recently, our Wednesday class had just such a day, and we were left pondering the ingredients that infused this magic brew (humbly noting that it was really the children who brought the ingredients and made the brew!): a creative group of kids with great synergy; a balance between planned and spontaneous, child-led activities (weighted toward the latter); activities with real-world relevance that engaged imagination, collaboration and problem solving; open-ended and place-based learning; a mix of fun, playfulness and experimentation; and a dollop of good luck…
The day began cool, cloudy and invigorating. As this was our second class, we started our morning circle with a name game, then reviewed basic safety and the three animal calls we use to signal to each other in the forest. At each class, before we head to the forest, we like to play a run-around game that wakes up our bodies and brings us out of our shells. Since the children had been asking about when we could have a fire, and there was still a fire ban due to the drought, we chatted briefly about the Fort McMurray fire and introduced a running game called Fire in the Forest. The children secretly choose a local animal that they’d like to be, and they go to one end of the field. Then the Fire (me) calls out “all animals that have fur [or hunt at night, or swim etc.], cross over!” The animals with that trait have to run to the other side without being caught by the Fire. It’s always gratifying to hear the children think more deeply about their animal, “Wait, can bobcats swim?… Do I eat plants?” Auramarina, our sub for the day, was helping field questions, and for the investigative types, a field guide was available.

At the end of the game the children were excited to divulge their animal and their strategy for avoiding the Fire. As we caught our breath and rehydrated, we had a brief conversation about our community agreements- how to treat each other well and how to express our needs in a constructive way. They understood well, providing some good examples, so we set off to the forest feeling upbeat about the day ahead.

Our first stop on the way to camp was the pine grove, a lovely area with soft ground padded with golden pine needles, a small slope down to a stream (now but a trickle), and a huge culvert that we can walk through. As we had built mini animal shelters here the previous week, Raya and Shanti resumed work on theirs, inviting Anika (a new student) to join them. They patched it with clay from the ravine and adorned it with a few additional plants; a few kids tied a rope to a tree to help climb down the slope. Damon, Jamie, and Charlie said they were having difficulty climbing up the steep bottom section of the slope. Damon proposed one way up, and Jamie objected, “No that’s too hard! We need to find a way up that everyone can do.” So I asked what they could build or make to assist their ascent. One of the boys exclaimed, “We need steps!” I heard a conversation ensue about how they could build the steps, and they ended up agreeing that they needed to carve out footholds from the dirt.

“Bryarly, could we use your knife?” one asked. I explained that we use knives for whittling and carving wood, “So what else could you use?” “A stick?” Damon asked. I agreed- a nice robust stick could do the job. They each found one and after 30 minutes of persistent digging and scraping, they had their steps. “Yay, our steps work!” they exalted. Their faces were beaming with pride, having solved the problem and created something useful out of the simplest parts: sticks, dirt, and determination!

While the footholds and shelters were being built, Raphael and Charlie took out their journals, and began documenting our morning thus far. Charlie said he wanted to remember everything that had happened so far and began sketching a map of where we had been and what we had discovered.  It felt good to see all the children happily immersed in a project of their choosing, wherein they were practicing skills such as collaboration, sustained focus, problem solving, and turning loose parts into tools.

Soon, stomachs began to grumble and it was snack time, so we regrouped beneath the pines for snack. During snack, I decided to tell the group a story about why it’s a good idea to learn at least one awesome, fool-proof knot. We had been tying ropes to trees, and I wanted to teach the children how to tie a secure knot, so I thought the story about how I lost my uncle’s favourite canoe when I failed to tie it up properly, would be a motivational springboard to that activity. After snack a few children showed an interest in learning the Mooring Hitch, so we practiced that for a little while until we decided to make a move toward camp.

Our camp consists of a small clearing and a tarp shelter nestled in the dappled shade of a young white oak forest. The forest floor is carpeted with long grasses, clusters of sensitive fern, and patches of meadow flowers such as goldenrods and asters. It’s a pleasant place to be at midday.
​
Before settling in for lunch, we played a running/sneaking game called Camouflage, and unfortunately near the end of the game my ankle twisted in a hole, so I hobbled to camp to administer first aid. The others circled up for lunch, and Auramarina suggested that we go around and share something we feel grateful for. Someone said they were grateful for their food; another said for the Camouflage game; another exploring the culvert; and Raphael appreciated chatting with Raya about an imaginary Minecraft mod that they would create. Auramarina and I were amazed at the openness and sincerity of everyone’s sharing, because sometimes when we first introduce gratitude sharing, all we hear are the crickets chirping, or a shy peep.

As the children ate, I brought out the first aid kit, tensor bandage, and ice pack, and Charlie took note. He piped up and said, “I can help! Can I help? I know what to do and I’d kind of like to be a doctor.” “Okay thanks Charlie.” I said, handing him the tensor bandage and ice pack.  I showed him where it hurt, and he wrapped up my ankle carefully as we talked about the benefits of the RICE response (Rest, Ice, Compression and Elevation) for sprains. He then said, “Actually, we’re going to need a doctor and medical clinic here in our village, so can I go set one up?” “Sure, let’s put our lunch bags away, then you can, “ I said, wondering whether I’d have to abandon my original plan for the afternoon, which was to suggest building a group shelter.

Well, as soon as Charlie started assembling materials and choosing a spot for his clinic, magic started to happen. The other children were inspired by the idea of creating a village and ran with it. Lee and Damon decided to set up a bakery, and set about collecting and sampling different varieties of crab apple, double-checking with us that they were in fact crab apples; Raya and Anika started creating a nook for their herbal café and apothecary; Shanti asked Charlie if she could be a doctor too, to which Charlie (who is a few years older and a gentle soul) replied, “Sure, I can give you some training.” Raphael queried his classmates about how people were going to pay for their services, to which someone replied, “How about with acorns?” We then noticed that shiny green acorns were abundant beneath the trees with leaves that had finger-like lobes, the good ol’ white oaks.

This led to a frenzy of acorn collecting and a closer look at which trees were the oaks and which were the maples and elms. A few kids discussed whether the brown acorns were worth more or less than the green acorns. Someone proposed that the brown ones be worth $5 and the green ones $2, to which the others agreed. After a few minutes of collecting, everyone brought their handfuls over to the ground tarp and calculated the value of their pile. Some were counting in twos, others in fives, and as they exceeded 100, Auramarina and I thought, “Wow, they’ve created an economy, and now they’re doing math; this is awesome.”

At first I was worried that the use of currency would spawn greed or unfair trading, but it flexed the children’s problem solving abilities: when someone didn’t have enough acorns for something, they negotiated to pay later or would barter one of their items.

For us teachers, this spontaneous village activity was ripe for supporting interdisciplinary learning and sharing locally relevant knowledge. We had the opportunity to explore with Anika and Raya a few local plants that are edible or medicinal, which they could use to make tea. Anika also discovered that milkweed seed fluff could make a good absorbent material. Charlie, Shanti and I collected plantain to treat bug bites and small scrapes. Lee and Damon had a lesson on knife safety and cutting crab apples. And finally at the end of the day, we gathered in the shade of the oaks, and we told the children a story about how the oaks came to be here. It’s a story that starts at the end of the last glaciation 10,000 years ago, and involves the northward march of trees and animals as the climate warmed, and the survival strategy of our friends the squirrels, who grow an oak tree when they forget where they’ve hidden an acorn.

This was place-based education at its best – better than anything we could have planned – and it has led to weeks of extension activities, building on their experience and knowledge of the place. I smile when I think that it was catalyzed by the children’s rich imaginations and a simple twist of fate (or ankle).

​Author: Bryarly McEachern
Note: Names have been changed for anonymity.​

We have spots open for our summer camp